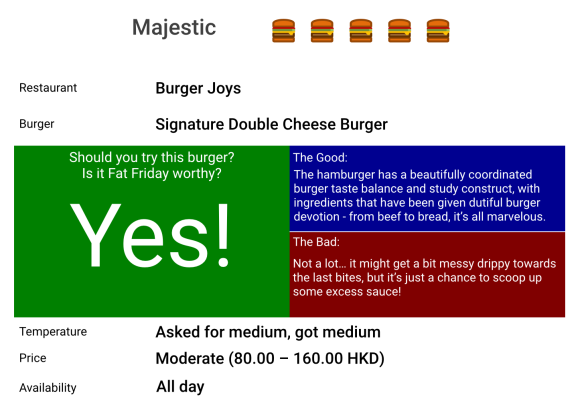 Burger Joys Signature Double Cheese Burger is a majestic burger. The hamburger, from its beginnings to its concluding moments, to everything in the burger in-between, proves to be an invigorating hamburger experience – it is a burger that has had its dutifulness devotion given, a beautifully coordinated hamburger, as it becomes obviously hard to find any form of wrongdoing. Both the burger taste balance, balanced with an appetizing enthusiasm that will unite burger and soul into blissful accord; and the burger construction, robustly constructed for a meld of hands and burger to a comfortable sturdiness, will deliver a mesmerizing experience of complete hamburger gratification.

The burger’s aroma, rising thought the seedy Wan Chai air, grants one with a beautiful hamburger introduction that makes the impending first bite a moment of desire to get excited about – a worth of carefully refined components that tastefully copulate in one’s mouth making each mouthful a pleasurable joy to experience.

The ingredients; from the burger’s center core – two patties that dignify meat with a wholesome taste of beef that has been subtly seasoned to create a capstone, patties that exist with a tearable sufficiency that softly rips the beef with each ditching bite, entrenched in a delightfully balmy creamy-esq cheddary cheese that is well represented in the overall experience. To the mid-levels of fresh crisp vegetables – a silky firm flowery lettuce, a crunchy slice of thick yielding onion, a plump juicy tomato; all smeared in a tangy secret sauce of oily quality that adulterates itself to the balance with a faint embrace. Topped with a brittle bacon that fractures with the grasp of the bun releasing copious amounts of flavor with each crack. To the outer edges – a soft and spongy bun that adapts to the shape of one’s hold and the inner workings on the burger with a respectful level of compression and pulpy absorption, holding everything together with an amusing doughy taste… All, with ideal ratios, culminate in a ceremonious burger taste balance and burger construction. The truffle fries are awesome.

For 138.00 HKD one must try this hamburger – Burger Joys offers a burger that doesn’t presume itself with any gaudiness; within a small cramped space towards the end of Wan Chai, this true burger joint has fathomed the simplicity of a burger joint hamburger, a burger with the right ingredients and burger care, a magnificent burger that radiates burger joys.

Gilbert’s Burger, the Mr. President, is a majestic burger. This personable burger, with a name to reflect aspirations of hamburger greatness and an inconsequentially humble menu descriptor, is sure to instill a long lasting burger impression; the discourse delivered by this burger’s burger taste balance and burger construction demonstrates charisma, it shows burger expertise… every bite, every touch, every taste of this burger is one vote towards a momentous hamburger experience that will draw out one’s burger inspirations, that will emote hamburger pride, that’ll promote burger greatness in both Seoul and the world.

As the burger arrives, under a cool green light that radiates from a confounding slogan that claims ‘green is hotter than red’ and with only word-of-mouth views of satisfaction towards this burger joint, an eager wait is filled with prodigious contemplation as lungs are suffused with burger elation, eyes inspired with hamburger aesthetics, and taste drenched in a tremendous burger taste balance – the deliverance onto one’s senses become an eloquent pleasure to ingest from a succinct range of profoundly rich ingredients.

The teamwork represented in the components is impeccable, with the greens as the burger’s only slight drawback – not having had a chance to comfort in, the veggies are too cold for the rest of the burger. It won’t matter much though, as the romaine lettuce is crisp and lush, the tomato firm and juicy, and the chunk of red onion surprisingly subtle; beyond that, the rest of the ingredients gleam in brilliance. The beef is assertively tasty – each articulately teared mouthful is a passionate embrace of beef, of a patty that is smartly seasoned and expressively juicy. The bacon, with an unyielding reddish-brown that looks and feels brittle to an easy crumble, manages to rouse the meat experience with its baconesque saltiness.

The burger construction and its different textures are marvelous – staged to a stability of enjoyment, everything is kept in place with minimum spillage. The cheese is fruitful with a grading sharp cheddary taste, and bears an exciting earthy texture that melts itself in exquisite particles; the bread is select and supple, appetizing and able, carrying the burger and a hearty sesame leave-behind. The horse radish mustard mayonnaise is present without being domineering, and the fries are good.

For 12,500 KRW (84.00 HKD) this is a burger one has to elect to try; found in the heart of Seoul, lacking any sort of burger localization, this is a hamburger that will deliver on all its burger promises, one that can rightfully be called the Mr.프레지던트.

Beef & Liberty: The Big Ron Burger (no longer available on the menu)

Beef & Liberty’s The Big Ron Burger is a majestic hamburger. It is an appreciation to one of the greatest hamburgers of all time, and with heartfelt reverence, this burger has embarked on the onerous task of fulfilling a burger taste balance that has indulged one and so many with sentiments of joy and elation. Embracing its own origin story, The Big Ron gives the respect its hero deserves while exhibiting its own show of force; the burger is not better nor worse, it is not a replacement to its champion – it is a burger that brings its own character traits to the game, that delivers a refreshing set of ingredients on its own admirable accord.

In the light of day, the burger stands tall from its perch – the two beef patties, the special sauce, lettuce, cheese, pickles, onions, on a sesame seed bun, leave a remarkably mettle impression; and while there’s still some room for improvement, particularly in its burger build – skilled burger boldness defines this hamburger. The two patties show their cojones through a laudable beef taste, differing from the original, they are juicy and hearty; but show vulnerability in a soft texture that frails the more one delves into them. A special sauce is good, it gives the burger a robust tang without subduing the burger taste balance, allowing for the rest of the ingredients to show their valiance.

The finely chopped lettuce and white onions, a subtle green resolve for the burger, maintain a crisp stance; whereas the slice of cheese, audaciously mild and yellow, flows with the hamburger’s savor and movements. The suit that holds the burger, the trinity of sesame encrusted buns, the three firm layers of bread with a pluck taste, work well with all the hamburger components – never overpowering, holding fast, and reconciling the juices. The burger’s bane, its debility, comes from a burger construction that slowly weakens; just like the original, when first revealed, the burger carries itself with a stackature of gameness, but with each lift each impending bite, components in the burger construction begin to shift… still, it’ll strive to hold itself together, to deliver one good last mouthful. The fries (not pictured) are great.

For 158.00 HKD this is a hamburger one had to try, because it is a burger that Hong Kong deserves, but not one it ever needed, so one has to eat it. Because it can take it, because the burger is not a regular menu item. It is a majestic burger, a tasteful hamburger, The Big Ron.

*It was with a great smile and enthusiasm, that Beef & Liberty invited me to try this awesome burger.