Leave a comment
By fkskovmand Burger reviews, Florida, Orlando, Out of town, USA 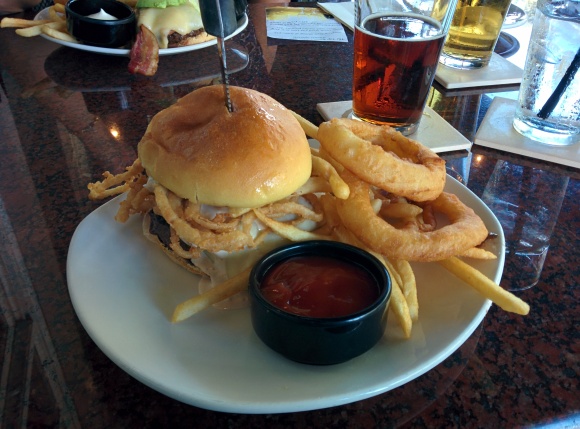 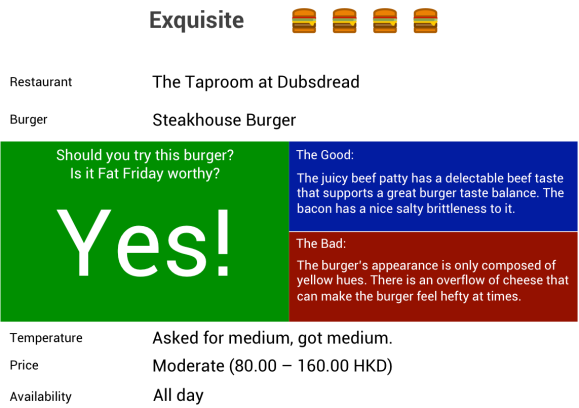 The Steakhouse Burger from The Taproom at Dubsdread is an exquisite burger. Permeated in a single palette of warm earth-tones, from white to yellow to orange-brownish and black, the burger’s first conviction doesn’t appear to be an enlivened one; without the tints of green, red, and even purple – the burger, at first glance, is a rather banal one. Then, the first nibble, a congress of mostly blond ingredients that form the burger taste balance suddenly become an interesting mouthful, an enjoyable experience to the senses.

The hamburger’s burger taste balance and burger construct has looked upon the primary components of a burger, the meat and bun, bypassing any touch of pastoral freshness to deliver a swell burger. Coming face to face with the burger, in order to reach the bacon and the beef patty, one will have to confront a thick viscous shroud of cheese with a not-too-sharp but waxy trait, a delectable cheese that at times can feel overloaded. Soon after what follows the cheese is a well embodied beef patty with a great untouched beef taste that has been well taken care off, a patty that easily tears to release a full load of meat juices that drip onto the bun; a bun that feels springy to the touch and complements the burger in both a grilled semi-charred taste and construction, that maintains a structure despite the tasty meat juices and burger sauce running down the chin of the burger.

The bacon, visually lost inside the blanket of the cheese, creates fantastic salty glimpses onto one’s tongue; tasty and brittle, it is a nice addition to the burger whose crunchiness nicely complements the only ‘true’ vegetable in the hamburger. Crispy onions have been stacked onto the cheese for a savory treat, a section that adds some crackle to the burger, it can feel somewhat lonesome without any other greens. The horseradish sauce has a good sweet tangy flavor to it, but it misses the piercing bitterness that usually accompanies the root. The onion rings and fries are good.

This is a pretty great burger for 13.50 USD, even though one might prefer to have a little more color within the expanses of the plate the burger does a fine job befitting its name as a ‘Steakhouse burger’ as the meats within befall to be the most savorous components inside the burger.