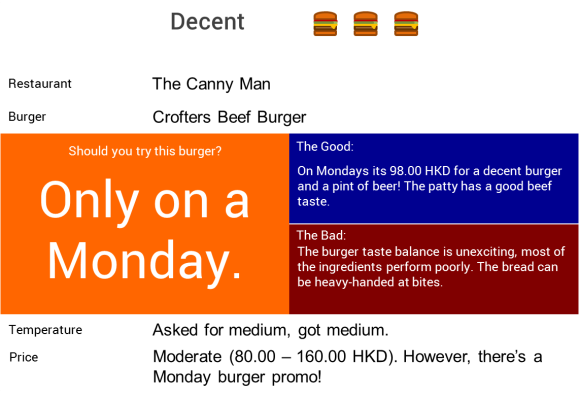 The Crofters beef burger is a decent hamburger. This burger doesn’t really stand out in any way, it’s actually quite a normal hamburger. Still, one day a week there is something that makes this burger quite special; it’s not so much the burger itself, but a promotion behind it. A deal that takes place on Mondays, a deal that turns a pretty forgettable burger into a slightly more memorable one, a deal that includes a cold pint of Carlsberg beer (probably the best beer in the world), a deal that creates an affordable burger – on a Monday! The Canny Man’s Monday burger promo lets you enjoy a decent hamburger with a nice cold pint, all for 98.00 HKD – this should already start making your Monday a little better! On any other day though, this magical Monday burger, becomes a rather ordinary hamburger…

The hamburger makes an entry in a promising light, a light that dwindles down upon the first few bites; as you begin to traverse this burger, you are soon to realize that it lacks a certain hamburger excitement. The well circumferenced patty, properly matching up to the edges of the bun and with the right temperature, has a notable beef taste. In itself, the patty makes a strong stance, a stance that is unfortunately brought down by its fellow compatriots. The dull egg, with a mild baby chicken flavor; the tedious vegetables, thick and at times, in particular the onion, overbearing; and the flat bacon, cooked to a softness that shouldn’t be allowed for bacon – all three contribute to create a feeble burger taste balance.

The bun brings forward and insipid usefulness – while it can hold the burger as one, it’s dry and at times provides an excessive bread feeling, one that could probably be countered with a slightly thicker patty. Given that the beef patty is at a whole other level of richness, you’ll wish that the other ingredients had the same level of commitment – there is certainly no ‘I’ in ‘team’, but ‘team’ spelled backwards reads ‘meat’, and this burger has that going for it. The ginormous wedges are good.

On any other day than a Monday i’m not sure i’d go too much out of the way for this 112.00 HKD burger; but come Monday, I know I wouldn’t say no to this decent burger with a pint of beer for 98.00 HKD! Like I said before, it’s already a decent way to start the week!

One thought on “The Canny Man”