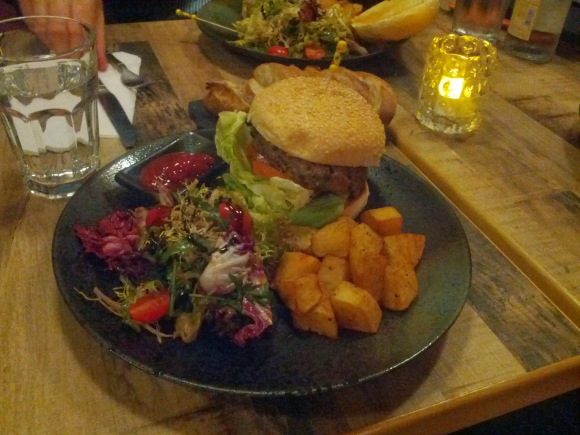 The Aberdeen burger is a disappointingly edible hamburger. It’s quite clear that this burger has received little to no care, existing simply because somebody thought a hamburger should be on the menu, without understanding burger graciousness. From the moment the burger is walked out of the kitchen, the vast uncolored grayness of the patty and the dull un-crisp yellowness of the bun, will make you suspect that there’s something inappropriate. Nothing about this burger is great or exciting, the ingredients feel bland and/or disproportionate – giving it a less than decent burger taste balance. You’ll almost feel annoyed that you have to finish it – you have to, in view of what you’ll have to pay for this poorly constructed burger.

The patty, considering that this is a ‘grilled’ steak tartar, has a disheartening beef taste; instead you’ll receive a herby patty that lingers with a zesty tangy sourness, made even more unappealing by a surprise in the form of an oddly shaped pickle hidden within. The exceptional dissatisfaction of the beef does not end at its appearance and taste, but persists in a chewy decrepit texture that begins to fall apart as soon as it is lifted from the plate. There is not much to say for the single tomato slice and iceberg lettuce; actually, for a burger of this price I’d expect they’d at least get some romaine lettuce or crisp fresh onions in it… but no… they don’t. The one ingredient that does leave a mark, although not a stupendous one, is the strong goat cheese that engulfs the burger, like a fire out of control, instead of complementing it – you might as well be eating cheese with an soft but bland piece of bread that lacked a certain toastiness. The sautéed potatoes… aren’t all that notable.

At 188.00 HKD for this burger, do not walk up the hill, do not pass go, do not collect anything; go somewhere else, run, be free to choose a more delectable burger, at the minimum a decent one. For 188.00 HKD this should be a more exciting burger, at least a burger with a single strip of bacon… but probably if this burger had bacon, it would still be just edible.

One thought on “Aberdeen Street”