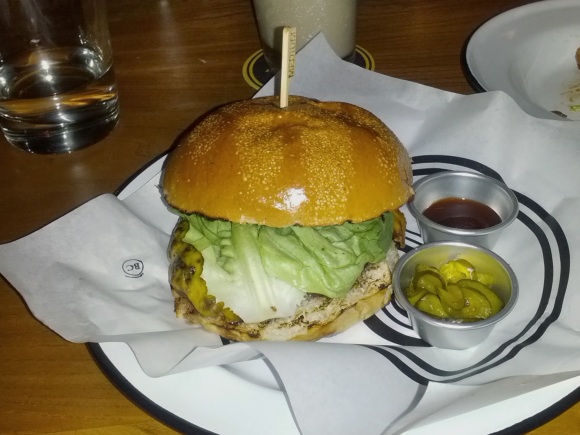 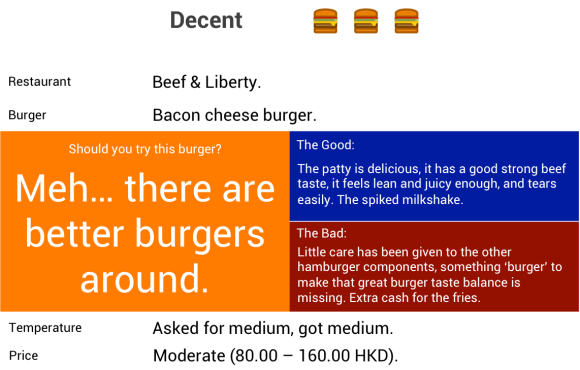 The Bacon Cheese burger is a superbly decent hamburger; Beef & Liberty has certainly done a great job in delivering a rich beef patty, while taking the liberty of disregarding everything else that makes a burger feel and taste so good. The burger isn’t bad, its just that throughout the hamburger experience there’s an impression that something burger is just not quite there.

It all starts with an awkward introduction; the burger, placed on a ‘bedpan like’ metal plate, is seemingly simpler than what is described and expected from the cumbersome menu. As the hamburger arrives a single leaf of lettuce, cut and draped over the inner workings, will have you asking yourself ‘where’s the meat?’; and the few condiments on the side, in an uninspiring presentation, might give you an irked feeling as you think to yourself ‘why doesn’t it all just come as one?’.

Opening the hood to check out the insides will not improve things, and the subsequent consumption makes things only slightly better. If you’re looking to enjoy some greens in your burger, look no further than the desolate leaf of ‘butter’ lettuce, cause there isn’t anything else. The sole piece of fair tasting brittle bordering on dry bacon has been miserably shattered and thinly spread inside; and a fine coating of bland cheese appears to have been almost melted away, a likely sign of an eager entrance during the preparation. The bacon jelly does manage to add a nice sweet zesty flavor, but only as a glimpse. The amount of love for these ingredients is too damn low!

As I mentioned, they certainly did get the beef part right; the patty, a strong companionator for a great burger taste balance, is utterly exquisite. The beef flavor is strong with this one, it feels lean, juicy, and rips easily. The grass fed cattle was sacrificed with all the right intentions, but the results as a burger are plain decent. The bun which is actually itself not bad, with a soft core and crisp exterior, does a good job at holding, and hiding, the scarce amount of fixings; still, as you gaze and demolish, the sour dough roll seems inadequate, almost inappropriate, and becomes too thin for a burger… you’ll end up wishing for a better bun. The french fries are alright.

The patty itself gives this burger the potential to be amazing, but when little care is given to the rest of the components it hard to reach that burger ranking. At 108.00 HKD, not including fries, there are a few other places around handing out better burger experiences. Beef & Liberty, newly opened in Hong Kong, has a nice set up; and I very much enjoyed one of their spiked milkshakes… unfortunately, probably more than the burger.

One thought on “Beef & Liberty”