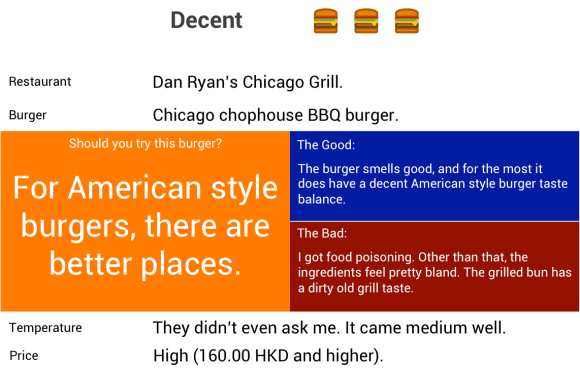 The Chicago Chophouse BBQ burger… made a chophouse out of my insides, for a whole night it put me in a situation in which every suffering moment was an anxious toilet game of ‘should I sit or should I kneel?’. Regardless of this terrible endurance, as this might have been a stand alone occurrence, i’ll attempt to give a neutral review to this ordinary burger.

The burger starts of on a great note, as the plate settles in front you, before you can lay eyes on it, you receive a pleasant waft of hamburger in your nostrils, suggesting that this might actually be an enjoyable burger. However, once you get a good view you begin to realize that this burger looks pretty common; and just as it looks, it tastes – nothing really stands out. Not that there is anything wrong with a standard burger, as this burger actually has a decent burger taste balance, but you can get better ordinary elsewhere.

Most of the ingredients in the burger feel a little boring, non of them make a great entrance. The patty, which is dry, will leave you craving for something with a stronger beef taste. The lettuce, the same old iceberg lettuce, this time stacked as thick as a deck of cards; the red onion, with its profuse taste; and the simple tomato slice, don’t provide a real sense of freshness in the burger. The pleasant caramelized onions which are further complemented by the tangy sweetness of the BBQ sauce, appear to be the main actors in this hamburger; while the grilled bun, which might actually be nice if it didn’t taste like a smokey grill that hasn’t been washed, is to be the main offender. The cheese, which one hopes will make its american cheddary tangy presence, remains unnoticed throughout most of the burger.

The burger, imperfectly constructed as the bun begins to tear and the whole falls apart before the finale and poorly proportioned with some overbearing ingredients, can pass as a decent burger. The french fries are alright. Dan Ryan’s feels and is like an american joint, the Americana on the walls will make this burger feel like a typical american burger, but at 178.00 HKD, if you’re looking for an American burger there are better places.

One thought on “Dan Ryan’s (closed)”