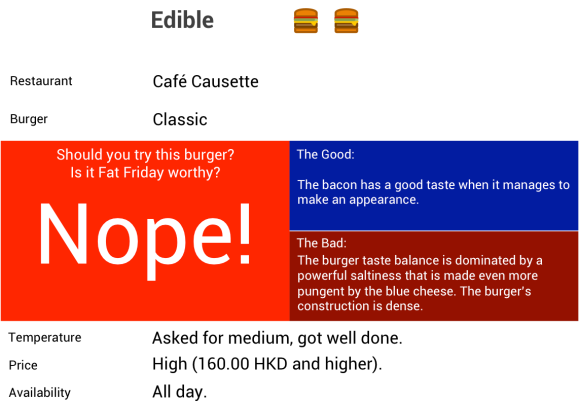 Café Causette’s classic burger is an edible hamburger. Found in Hong Kong’s Central district, inside a lavish hotel and surrounded by a luxuriant environment – this humble looking burger, with a familiarly simple burger visage and no apparent extravagantly gourmeish touches makes for an unexpectedly interesting entrance; one that falls short the moment you enter the realm of its burger taste balance and hamburger construct.

Within the first uplift of the burger there is a noticeable density to the burger feel, a restraining press that is slightly felt on the outer bun regions that gets stronger towards the hamburger’s beef core; a brawny patty with a thickset quality, a set of awkwardly cut vegetables, and a bun that feels too chompy – build a hamburger with tough burger construction that is accompanied by an equally resilient hamburger texture that level down the burger taste balance, resulting in a heavy burger experience that is felt by both one’s burger hold and each ensuing bite.

The burger taste balance was undermined, lessened by a set of ingredients that didn’t fully commit to their roles and one overtly dedicated entity – the blue cheese. As one savors the beef patty there isn’t an adjacent strong beef taste, and along with its awkward texture, it introduces an indecorous seasoning that is deluged by an overwhelming punchy saltiness instigated by the ungainly cheese. The tomato and the lettuce do bring forth a frangible feeling that unfortunately doesn’t elevate the burger taste balance by much – if anything, as you look at the environment and consider the price, these components become prosaic companions. The bacon, entering with an appropriately firm stance, can’t hold itself against the power of the cheese – and with each jab of the burger, as it struggles to escape the salty clutches, it’s only reduced to a slight peep. The fries are alright.

Priced at 228.00 HKD, plus 12.00 HKD for additional items such as cheese and bacon, and considering where this burger originates from – this is a pretty unexciting hamburger that is not worth the attention. With a simple burger mien, comparable to many of the plebeian burgers in this city and the world, this hamburger barely manages to put up a fight, much less keep up – at least it’s housed in a great location that many would be envious of.