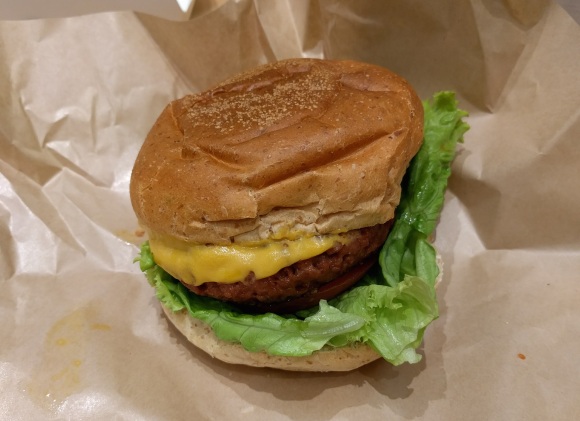 Green Common’s Beyond Burger is an edible “hamburger.” A “burger” that is far beyond any other hamburger one has tried, a sham from a vegan affair; and if this is what the future tastes like, then it’s a burger destiny to rise against. Everything about this “hamburger,” from it’s burger taste balance to the discourse that surrounds it, has the feel of an Orwellian dystopia… a world where citizens are fed ideals of what a burger tastes like; a place where we’re told that our meals are made with intricately named ingredients, that we are provided with all the nourishments we’ll need to be “happy.”

The first bite isn’t bad, it won’t taste awful… it just doesn’t feel right, and every succeeding bite adds to the uncertainty of honesty. The Beyond Burger’s “burger” taste balance is an uncompromisingly false reproduction of a hamburger. The patty, comprising of stuff like pea protein isolate, refined coconut oil, maltodextrin, and natural flavors, tastes as if it’s trying to hard to be factual – a distinctive acidulous taste of grill that is not is professed. The cheddar cheese, a glue like substance that’ll fuse parts of the “burger” into solid blocks, cues a nutty acetic like cheese substance that sticks to one’s teeth.

It’s the uneasy feeling of deceit… the perception of eating something phony, no matter how good it claims to be, that doesn’t sit right in one’s judgment. At least the veggies and bun give a glimmer of hope in this dismal burger future. In grandiose form, the avocado fills each bite with its creamy effervescent greenery; and the bun is crisp, soft and tasteful. The burger construction is tenuous, not only from a lubricious layer of avocado that constantly slops, but from a patty texture that feels as delightful as a mouthful of small chewy pellets with a cartilage like texture.

For 108.00 HKD one should try this fradulous “hamburger,” if only to experiment. As a burger zealot the first step might be full of skepticism and low expectations, but it’s important to keep an open mind… to try new things. The beginning is better than you might think; but still, the insincerity of this “burger,” the artificiality of its taste, will eventually make the last interaction, the last bite, a disappointing incident. Walk out and look for those burgers that awake feelings, that make you feel free. The best burgers… are those that are honest and tell you what you already know.