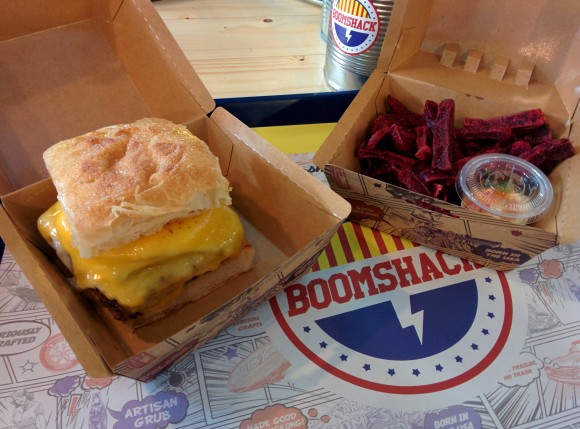 Boomshack’s Vintage burger is a decent hamburger. The boom burger, as it’s categorized on the menu, won’t particularly cause a booming blast of satisfaction in one’s hungry stomach; not by cause of its burger taste balance, which is good in itself, but because of a burger construction that explodes with the burst of a twinkle; and with this it’s hard to see the vintage side of this hamburger, a burger from the past that represents the best of its kind… it is the more traditional option in the shack.

The favorable burger taste balance, though a tad on the salty side, seems to have been chemestried with ingredients that have received, flavor wise, proper attention. The square patty, with a juiciness that bursts in a richly manner following a fine texture and rupture, has a prosperous beef taste. The mixture of three cheeses, cheddar, provolone, and something else, melted together in a milky blend of goo, savorily flow through burger to mouth without imposing a hefty oleaginous feel. The bread, a riveting potato bun that actually awkwardly resembles a bun, has an amicable flocculent softness that is confined within an easeful exterior that has a bit of a crackle to it. And the vegetables, a sprinkle of chopped onions and a slice of tomato, feel as fresh and frugal as shall be.

The botheration with this simple burger, which is initially hidden as it sits inside a container, is not its contents, but a small burger construction which detonates with a burger force of minuscule proportions. As one proceeds to open the carton, weary of a burger boom, what one is left with is the shared feeling and look of bewilderment and defeat that Wile E. Coyote has when something doesn’t go as would be expected. Somehow somewhere one could probably find an ACME Corporation logo followed by an absurd contents description printed on the box, and as the roadrunner continues its run so will one’s hunger. At least the burger ratios work. The beet fries are alright.

For 78.00 HKD, plus 30.00 HKD for the combo, an overpriced feeling befalls onto this burger, a feeling that increases as one departs this shack of a trailer park with an unsatiated yearning for a full stomach. On occasion even a booming burger taste balance can be brought down by a dud sized burger, a fizzle that lessens this so called vintage burger.