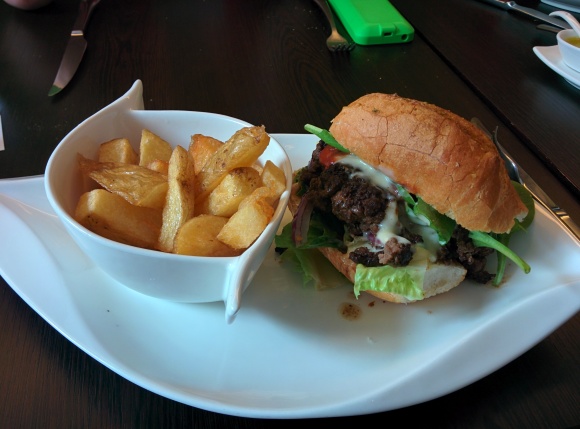 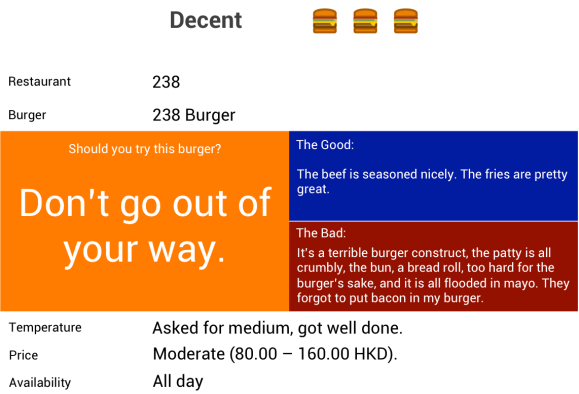 238’s 238 burger is a decent hamburger. This burger design has a certain euro-essence to its burger taste balance; and with that they’ve tried to play around with the burger components, the results is a burger experimentation that didn’t go horribly wrong, but didn’t exactly go wonderfully right either. The hamburger’s decency is much less derived from its burger taste balance, which in actuality can be quite enjoyable, and much more stemmed within its dreadful burger construction. As one stares at what has been presented, it’s difficult to snub the immediate inadequacies that fault the hamburger – inappropriate assemblage that is visibly apparent in the burger’s main support pillars, the patty and the bun.

The beef patty will be the first one to call attention, it has a nice brown crisp coloring to it that is accompanied by a tangy-esq beef taste that is well seasoned; unfortunately, as it visually crumbles, it lacks the texture of a real patty. I’m not certain what ‘chopped a la minute’ means, but I hope it doesn’t mean that the beef was minced, fried, compressed, and pattied, all in that order, within a minute’s time – cause it really felt that way. Then we have the bun, which is really just a bread roll; and as a roll, what the patty lacks in strength, the bread makes up in a hard exterior that won’t break as you bite into it expelling the burger contents outwards. The garlic seasoning on the bread was a nice touch though.

Finally there’s the mayo, a what-feels-like home made mayonnaise that is thick and rich and good turns out to be a real mess… literally. It’s like someone in the kitchen got so excited with their mayo that they smothered the burger in the stuff, leaving you with an explosion of condiment that’ll figuratively cancel out any vegetables present in the burger, veggies which are quite alright. They did seem to have forgotten one of the ingredients in the burger, listed in the menu is bacon, in my burger, was no bacon. The thick golden fries are quite excellent.

For 150.00 HKD one gets to wrestle a hamburger, and ends up covered in white stuff; and while the euro-taste might be interesting the construction is not. Towards the end, the fries were a little more enjoyable than this over-complicated burger.

#GasolineGrill is ranked as northern Europe's number one #burger, and number two in #Europe. It's a really cool spot, who would've thunk that a gas station could serve such a magnificent burger. Gasoline Grill's #Cheeseburger is #majestic (5/5) #hamburger. The good: As with many of the ingredient's from my father's land - #Denmark, every component of this hamburger's burgers taste balance is #tasty, and together they form a delicious and satisfying combination that captures the essence of great 'grilling'. The bad: The #bun felt a tad dry at times. But overall it worked wonders with it's counterpart, the #patty. #cph #burgershk #burgerlife